Patent is an exclusive right of owner which is granted by the sovereign state in order to prevent others from exploiting the patent with commercial purpose in the limited period of time to exchange for publicly disclose invention to allow other people approach the invention. To obtain a patent right, the applicant has to file a patent registration application with the National Office of Intellectual Property of Vietnam (NOIP) and the application will be examined to consider the patentability. After formality accepted, application is published on the Industrial Property Official Gazette. Under Vietnam IP Law and Regulations, Article 112 of Law on Intellectual Property, any third party can file a written opposition with the NOIP to oppose against the grant or refusal to grant a patent at any time during the period from the date of publication to the issuance of a patent. According to Patent practice in Vietnam, there is no independent stage of opposition settlement. The opposition is settled in the substantive examination stage.

Pre-grant patent opposition procedure is briefed in the following chart: 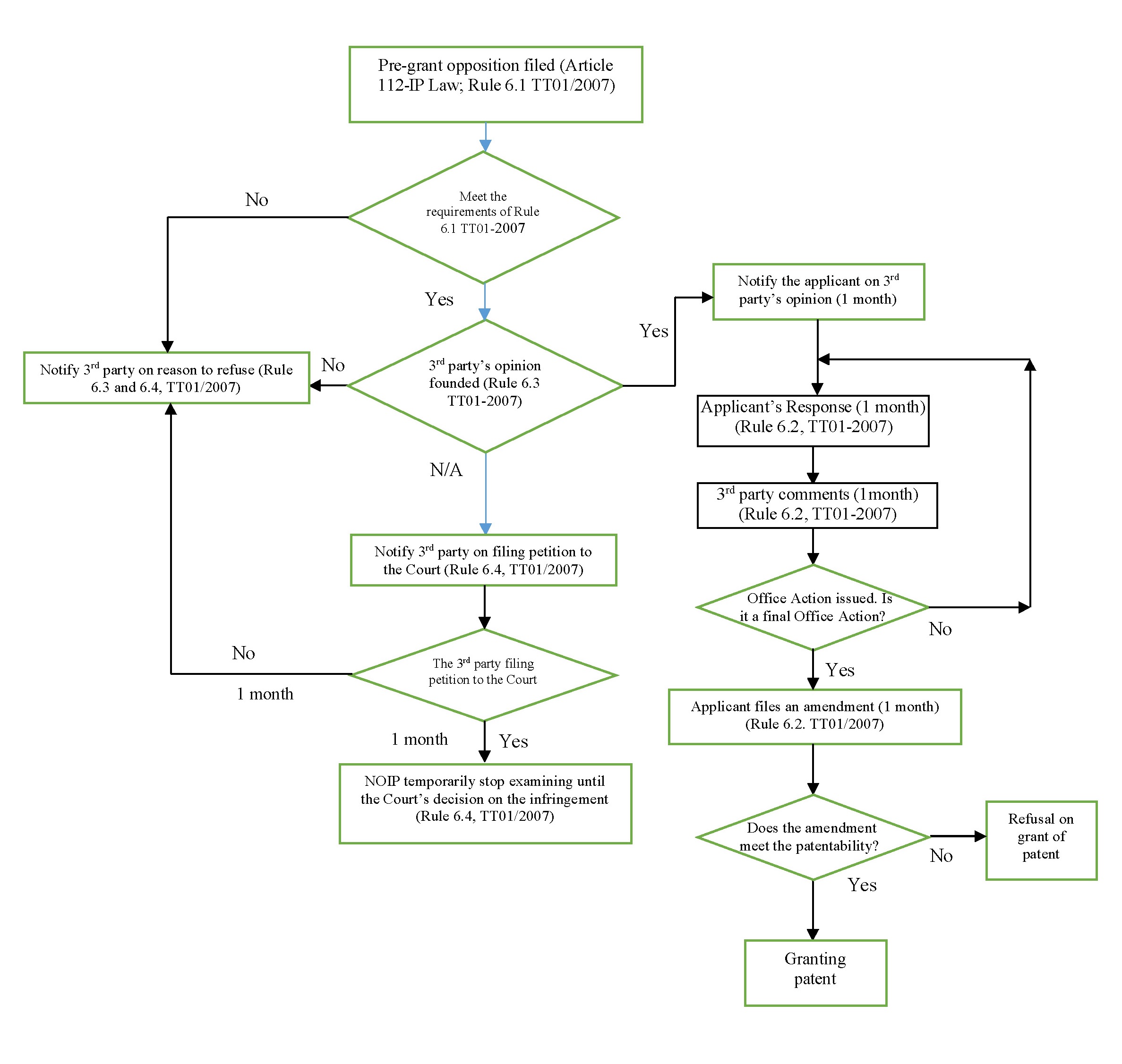 The opposition can be filed on one of the following grounds:

– The invention does not meet patentability criteria;

– The applicant(s) are not one who is entitled to file the patent application; and

– The absence of an agreement to file one application only between persons who are entitled to file such patent application in case that there are more than one person entitled to do so.

However, this article is going to relate to the aspect of provision of prior art in the substantive examination stage from the third parties to oppose against patentability of pending application as well as the effectiveness thereof.

Effectiveness to provide prior art information in the examination proceeding from the third party will be analyzed based on the impact of this action on the applicant, third party and the authority.

(i)   Impact on the third party

As far as we know, invention can change ideas into competitive products which can significantly increase profit for enterprise. When the patent is available the enterprise can use the patent to obtain the remuneration by transferring the rights of use patents to another organization or individual who is able to commercialize them.

A patent owner has an exclusive right, he/she therefore is entitled to exploit the patent for 20 years from the filing date. Through the exclusive rights, the owner can prevent the others from using patent for commercial purpose, accordingly decreasing the competition from the others. In other words, if the competing products of the competitor are successful, specially, a stronger competitor will produce the products with cheaper price that is superior in the market. Even any smaller competitive companies can produce the similar products to be sold with lower price because they do not charge any cost of investment for research and development as the patent owner. Besides being competed, the patent owner may be obstructed in the transfer the rights to use patent.

Third party may be any organization or individual such as independent inventors, universities, companies or may be a law firm on behalf of for anyone, who have conflicts with the applicant in the patent right. If the third party is a patent owner, the conflict may be the infringement with the protection scope of the granted patent. Otherwise, the third party has produced and prepared to sell products which are not protected as patent, the conflict will occur when a similar products of the applicant is patented. Therefore, it is very important for the third party to actively keep an eye on the market to detect the conflict in patent right. When the third party discovers the conflict with features to his/her technical solution, for example, a similar technical solution has been filed with the NOIP to register a patent application, he/she can submit a written opinion to the NOIP to oppose the patent application as stipulated in Article 112 of Law on Intellectual Property.

The opposition of the third party may be successful or unsuccessful. Commonly, there are three following outcomes from the opposition.

Thirdly, the application is maintained as granted after amendment. In other words, the scope of claims of the application is narrowed. In the opposition process, the applicant still submit an amendment of the claim set  relevant to the prior art provided by the third party to distinguish the pending application from the prior arts. As the result of this action the opposed application is still granted. The grant of patent for the applicant may be undesired to the third party. However, the amendment of the claim set may be a desire of the third party to narrow the protection scope of the competitor.  This may lead to clarify the business scope as well as better delimit the boundaries of portfolios between the competitors in order for the effective investment from the entrepreneurs.

From the Open policy, Vietnam has approached and promoted the development of Intellectual Property in order to integrate in the world trade. However, because of being a developing country with young Intellectual Property, it is difficult to ensure the quality of the examination to issue the best patent which can contribute to the technical and economic development in Vietnam.

Nothing can assure that a patent office will be able to examine an application precisely if the examination process is required to search prior arts over the world. The provision of prior art information by the third party may be the only ground for the patent office to decide whether or not the pending application with the similar technical features is granted. This leads to the examination is conducted thoroughly.

The prior art submission in the examination process not only benefit the third party in the competition but also enhance the quality of examination process in case examiners can not find the prior art having the closest subject-matter to that the examined application. The issuance of bad quality patent will cause excessive burdens on society including the economic impacts such as inefficient resource usage and harm to economic growth. For example, investors will waste time and expense for manufacturing products from the bad quality patent. If a patent is not ensured novelty or inventiveness, it will cause unnecessary prolonged litigation of ownership because of wasting time and money of each of sides.

Because of some limitations in searching for prior art, particularly the infrastructure is being completed, it is difficult for Vietnamese Examiners to conduct searching and examining application on a wide scale. The submission of prior art from the third party is useful manner for patent application examination proceeding. Through the prior art submission, examiners can evaluate patent application more thoroughly to issue high quality patent and remove low quality patent from the patent system.

– The opposition from the third party is successful, the application is refused to grant patent because of not meet the patentability. The benefit belongs to the opponents. Of course, the applicant suffers a loss of prosecution.

The reason of low opposition is that in recent years, although enterprises in Vietnam are aware of intellectual property right, however, small medium enterprises have not been aware of watching the market as well as actively search the information of related technical solution filed with the NOIP in order for bringing out timely action to prevent an initial competition stage in which the competitive products has not presented in the market. The monitor of related technical solution should be considered as a strategy of research and development for new technology of the enterprises to avoid a litigation that causes waste of time and money in the future.

Therefore, it is necessary to propagate the benefit of prior art submission from third party to promote the clarification of business scope, delimit investment plan as well as improve examination quality for the issuance of the best patent. Moreover, the quality patent will enhance the effectiveness of investment as result in promoting the development of industry and economy for a developing country like Vietnam.

– Law on Vietnamese Intellectual Property 2005 (amended and implemented in 2009)

– Guidelines on Examination for Patent Application